Amir Khusro was the first popular poet of Hindi Khadi Boli, in the fourteenth century  who composed many Ghazals, Khayal, Qawwali, Rubai and Tarana etc. He was a Sufiyana poet and also a murid of Khwaja Nizamuddin Auliya. His real name was Abul Hasan Yameenuddin Muhammad.

Amir Khusro Dahlavi was in an atmosphere, which is full of political deceit. Yet he worked with sincerity for Hindu-Muslim and national unity, love, harmony, humanism and cultural co-ordination. 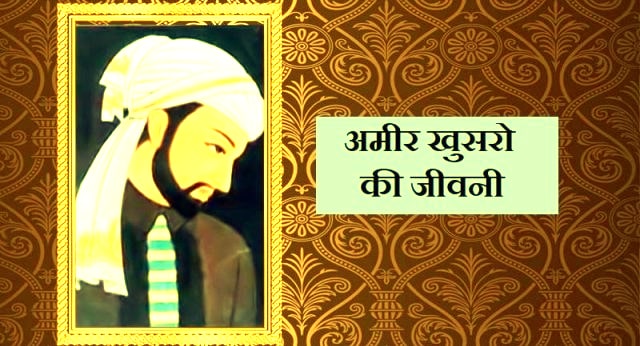 Amir Khusro was a royal poet. He was associated with the royal courts of more than 7 rulers of the Delhi Sultanate. Khusro has written many playful riddles and songs. Khusro is famous particularly in the Northern India and Pakistan. The poetry of Khusro is still sung at Sufi shrines throughout India and Pakistan.

Amir Khusro wrote poetry in Persian and Hindavi. He could follow all styles of Persian poetry. He used 11 metrical schemes with 35 distinctive divisions. He has written ghazals, masnavi, qata, rubai, do beti and tarkibhand. In 1271 he compiled his first “divan” of poetry, “Tuhfatus-sighr”. He got his first job as a court poet with king Balban’s nephew Malik Chhajju in 1272.

Amir Khusro was a prolific writer. He was the writer of both tender and highly involved prose. His most notable works include “Ejaaz-e-Khusrovi”, “Tughlaq nama”, “Khazain-ul-Futooh”, among others. Khazain-ul-Futooh (The Treasures of Victories) has been one of his more controversial books, in prose (1311–12).

Khusrau died in October 1325, six months after the death of Nizamuddin Auliya. Khusrau’s tomb is next to that of his spiritual master in the Nizamuddin Dargah in Delhi.