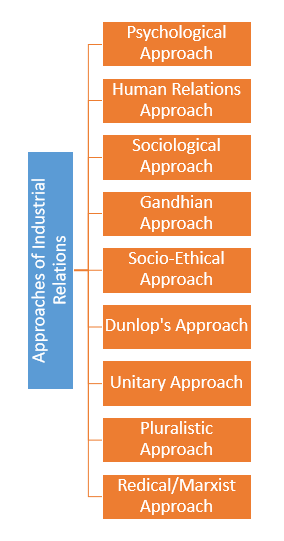 The psychologists are of the view that the problems of industrial relations are deeply rooted in the perception and the attitude of focal participants. The influence of individual ‘ s perception on his behaviour has been nicely studied by Mason Harie. He studied the behaviour of two different groups, namely, “ Union leaders ” and the “ Executives ” through Thematic Apperception Test. For the test, a photograph of an ordinary middle – aged person served as input, which both the groups were expected to rate.

Human Relations is the integration of people into a work situation that motivates them to work together productively, cooperatively and with economic, psychological and social satisfaction. Accordingly, the goals of human relations are –

The human relations approach highlights certain policies and techniques to improve employee morale, efficiency and job satisfaction. It encourages the small work group to exercise considerable control over its environment and in the process helps to remove a major irritant in labour – management relations.

The industry is a social world in miniature and the workshop is in reality, a community made up of various individuals and groups with differing personalities, educational background, family breeding, emotions, likes and dislikes, and a host of other personal factors such as attitudes and behaviour. These differences in individual attitudes and behaviour create problems of conflict and competition among the members of an industrial society.

The problems of industrial relations have been looked upon as one basically concerned with wages, employment conditions, and labour -. Welfare. But in fact sociological aspects of the problem are more important than other one. This largely includes various sociological factors like value system, customs, norms, symbols, attitude and perception of both labour and management that affect the industrial relations in varied ways.

Gandhi ji had immense faith in the goodness of man and believed that many of the evils of the modern world have been brought about by wrong systems and not by wrong individuals. He insisted on recognising each individual worker as a human being and believed in non – violent communism, going so far as to say that “ if communism comes without any violence it would be welcome. ” He laid down certain conditions for a successful strike –

Good industrial relations can be only maintained when both the labour and management realise their moral responsibility in contributing to the said task through mutual cooperation and greatest understanding of each other ‘ s problems.

In unitarism, the organisation is perceived as an integrated and harmonious system viewed as one happy family. A core assumption of unitary approach is that management and staff, and all members of the organisation share the same objectives, interests, and purposes ; thus working together, hand – in hand, towards the shared mutual goals. Furthermore, unitarism has a paternalistic approach where it demands loyalty of all employees. Trade unions are deemed as unnecessary and conflict is perceived as disruptive.

In pluralism, the organisation is perceived as being made up of powerful and divergent sub – groups – management and trade unions. This approach sees conflicts of interest and disagreement between managers and workers over the distribution of profits as normal and inescapable. Consequently, the role of management would lean less towards enforcing and controlling and more toward persuasion and coordination.

Trade unions are deemed as legitimate representatives of employees. Conflict is dealt by collective bargaining and is viewed not necessarily as a bad thing and if managed could in fact be channelled towards evolution and positive change. Realistic managers should accept conflict to occur. There is a greater propensity for conflict rather than harmony. They should anticipate and resolve this by securing agreed procedures for settling disputes.

This view of industrial relations is a by – product of a theory of capitalist society and social change. Marx argued that –

This perspective focuses on the fundamental division of interest between capital and labour, and sees workplace relations against this background. It is concerned with the structure and nature of society and assumes that the conflict in employment relationship is reflective of the structure of the society. Conflict is therefore seen as inevitable and trade unions are a natural response of workers to their exploitation by capital