Bamiyan is a historic place 130 kilometers from Kabul, the capital of Afghanistan. Bamiyan is famous because there used to be two huge statues of Lord Buddha. Among these, the height of the larger statue was about 58 meters and the height of the smaller was 37 meters. 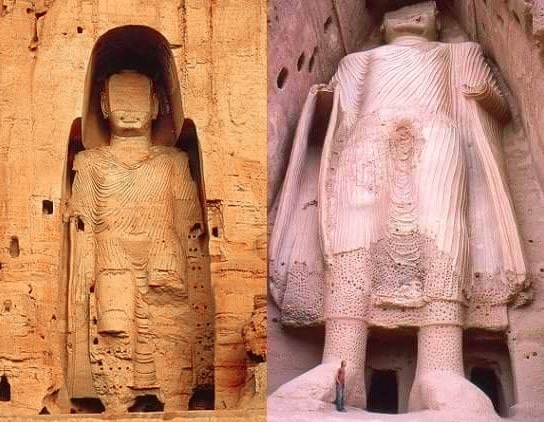 The sad thing is that due to the corrupt mentality of Islamic terrorists, we have to talk about these statues using the past. In March 2001, these statues were blown up with ammo by the Islamic militant organization Taliban. Today we will tell you about 7 things from the history of Buddha statues in Bamiyan till date.

When were statues of Buddha in Bamiyan

First said that we will not drop, then said that it is against Islam

The Buddha of Bamiyan was dropped

Statues have been attacked even before

In Islam, the word ‘fetish’ is a corruption of ‘Buddha’

The statue is being rebuilt by adding broken pieces

Professor Erwin Emerling of Munich University, Germany, is rebuilding the statue. They have identified 500 pieces of both sculptures. They are trying to make it from these pieces without planting a new stone. UNESCO is helping them.

The huge statue was rebuilt in 3D for just one day

In the same place where both the idols were destroyed, once again with the help of 3D technology, such huge statues of Mahatma Buddha were made. Full credit goes to Chinese couple Zhiyang Shinyu and Liang Hog. The couple was saddened by the Taliban demolishing centuries-old statues and then took up the project.

Giant holographic statues were produced with the help of projectors. This work was carried out on 7 June 2015. Permission to do this was given only on this day. It was never done later. 74 lakh was spent on this project.

The conclusion – In this way, you saw how the Taliban terrorists trampled these great pieces of art. People who destroy something cannot understand the power of creation. But we will not give up. If we break it then we will create thousands.