Friends, we know the West Indies because it is a great cricket team that has won almost all ICC titles, whether it be One Day World Cup and then T20 World Cup.

But you will be surprised to know that no country named West Indies exists on this planet called ‘Earth’.

What is West Indies?

The West Indies are a group of some Caribbean countries. Which are actually different countries but only for playing cricket are collected under one flag. Football is also very popular in all these Caribbean islands, but only cricket connects them.

This team was established in the year 1928 and played their first match against England in which the West Indies team lost by 58 runs.

Where is the Caribbean islands located ? 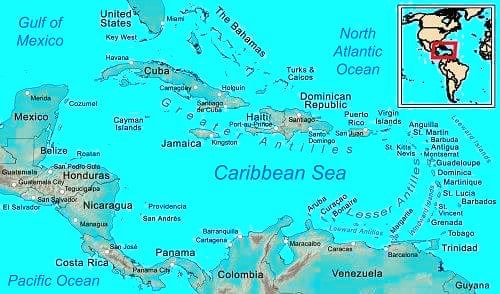 The Caribbean islands are located in the North Atlantic Ocean towards the eastern direction of the United States and Mexico. (View pictures)

The number of Caribbean islands is in the thousands, but only 15 of these islands are any of which a player can play in the West Indies team. Most players come from Jamaica, Guyana, Trinidad and Tobago islands.

WEST INDIES players sing cricket anthem
You all know that the national song of every country is sung before the match starts in the World Cup, but only the West Indies team is the team whose cricket anthem is not sung because all the players are not from the same country. In this way you can also call the flag of West Indies as a cricket flag.

People from the caribbean countries

Most people in Caribbean countries are of African descent. Apart from this, people of Indian, European and Chinese origin also live here.

Many people of Indian origin had settled in Caribbean countries during the British rule, due to which we still see Hindu players like Sunil Narayan, Ravi Rampaul and Shivnarine Chanderpaul playing in the West Indies team.

Some information about Caribbean countries

1. There are a total of 28 countries in the Caribbean, some of which still rule by England and France. (Keep in mind that the West Indies cricket team is chosen only from 15 countries.)

2. The largest Caribbean country is Cuba which is equivalent to the Indian state of Kerala. Cuba is spread over 42,804 square kilometers and has a total population of around 10 million.

3. The smallest Caribbean country is St. Kitts and Nexi. It is spread over a mere 261 square kilometers and has a total population of around 50,000.

4. The Dominican Republic is a Caribbean country which is the first choice of tourists, it is visited by 5 million people every year while the population of the country is close to 10 million.