Elements of cost is divided into three parts. Material cost, Labour cost and Expenses. Which is further divided into direct and indirect cost. 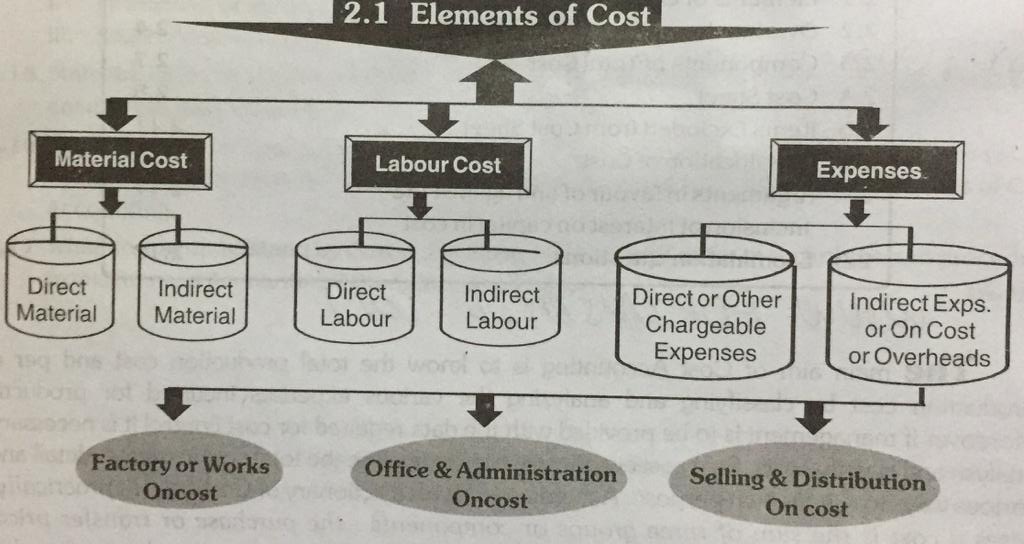 According to L.C.M.A. “The Material Cost is the cost of commodity supplied to an undertaking. ” It can be classified into two parts :

A. Direct Materials : No commodity can be manufactured without material. Whatever is spent on material becomes the part of cost of that commodity. Materials may be of two types (i)Direct Material (ii) Indirect Material. Direct material is that material which is used directly in commodity to be produced and it becomes the main part of the product for example wood used in furniture. cotton used in clothes, cement and bricks used in building etc. Thus the material that is to be applied in completing any contract or work or any process is called the direct material.

Labour is the second main element of cost. It is also termed as wages which means the amount paid to the workers for their services. Labour is the only active force of factors of production because all other factors are inactive and they are fruitful only with the help force, called labour.

A. Direct Labour : Labour is an active source of production. is also of two types (G) Direct Productive labour wages (ii) Indirect or Unproductive labour or wages. Those labour which actively take part in production or which can be identified or attributed wholly to a particular job, product or process or expended in converting raw materials into finished products is called direct labour.

B. Indirect Labour : The labour who is not engaged on the actual production of the product is called indirect labour as the labour of Chowkidar, Store-keeper, Foreman, Watchman etc. Indirect labour is too included in Factory Cost. Other examples of Indirect labour are Wages of idle time, Holiday wages, Overtime wages etc.

This is the third element of cost. It includes other than material and labour. According to I.C.M.A., “The cost of services provided to an undertaking and the notional cost of the use of owned assets is termed as other expenses”. This can also be categorised in two ways:

A. Direct Expenses (Other Chargeable Expenses): It includes all expenses other than direct material or direct labour which are specially incurred for a particular product or process. includes excise duty, royalty, architect’s fees, models, experimental expenses project expenses, hire charges of special equipments obtained for a contract, repairs and maintenance of plant and equipments obtained on hire, traveling expenses to the site etc. and these should added in Prime Cost. Mostly expenses spent on a contract are direct chargeable expenses. Internal transport expenses and coal used in mines and quarries, brick kilns, are also assumed as direct chargeable expenses. Prime Cost, Direct First Cost or Basic Cost is known by A. Examples of direct expenses expenses on designs of drawings or patterns or adding all the direct expenses.