The elephant is the largest animal living on the ground. This is not only the biggest animal, but there are many more interesting things about it that you should know- 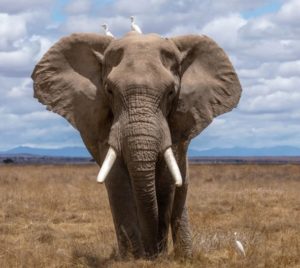 1. Elephants do not lie down and sleep only while standing.

3. An elephant can smell of water 4.5 kilometers away.

4. Elephants sleep very little during the day. Just 4 hours at most.

5. Elephant is the only animal that cannot jump and has four knees.

6. The thunder of every elephant also varies like the voice of humans.

7. If an elephant is hurt, another elephant helps him.

8. If an elephant of a herd dies, the whole herd thunders strangely.

9. Elephants prefer to be clean and bathed everyday.

11. Different fossils found in the world so far have shown that about 170 species of elephants were developed 50 million years ago. These fossils have been found in all continents except Australasia and Antarctica.

12. A female elephant gives birth to a baby every 4 years. Its gestation period is on average 22 months. In 1 per cent cases, twin children are born. The elephant is about 83 centimeters long and weighs up to 112 kg.

13. African female elephants have a gestation period of 22 months.

14. Despite having such a large ear, the hearing ability of the elephant is reduced.

16. You must have always seen that the elephant keeps on shaking its ears all day, have you ever wondered why? Actually, the elephant releases its giant body heat through the ears. This is done by the ear cells of the elephant. This is the reason that the ears of African elephants are very large, because there is more heat there.

18. The lifespan of elephants, like us humans, is up to 70 years on average.

19. Elephants usually walk at a speed of 6 kilometers per hour.

20. Elephants can swim in water for a long time.

25. Elephants have the largest brain among animals.

26. An elephant baby often kisses its trunk for comfort.

28. The skin of an elephant is about an inch thick.

29. Elephant’s trunk is attached to the upper lip and nose.

30. Elephant teeth continue to grow during its lifespan.

31. Elephants also use their feet to listen. When elephants move, a special kind of vibration is produced in the ground. Elephants learn about other elephants through this vibration.

33. In the beginning of the railway, elephants were used in place of cranes to push, lift and carry goods.

33. Even though a lion is called the king of the forest, he always avoids getting screwed by an elephant.