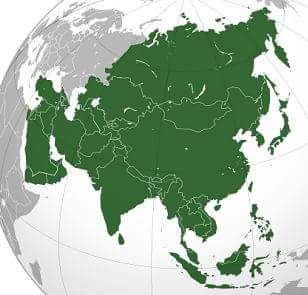 Asia is the largest continent in the world in size and population, mainly in the Northern Hemisphere and Eastern Hemisphere.

2. Asia has a total of 48 countries including China, Japan, India and Russia. They do not include countries such as Taiwan and Hong Kong because they are under China and not completely independent.

3. Asia has a population of about 444 crores which is 60% of the world population.

4. Nine of the world’s ten tallest buildings are in Asia. Four of these nine are located in China and the remaining five in five different countries Dubai, Saudi Arabia, South Korea, Taiwan and Hong Kong.

5. Five major religions of the world: Hindu, Christian, Islam, Chinese folk civilization and Buddhism have emerged in Asia itself.

8. Hindus and Muslims are followed by Christians (12.6%) and Buddhists (12%). The rest of the continent’s population considers other minor sects and religions.

9. Asia’s largest island is Borneo, which has an area of ​​about 7,43,000 square kilometers. In this way, the island of Borneo is about three times larger than Uttar Pradesh.

10. The smallest country in Asia is the Maldives in the Indian Ocean, close to India. The Maldives is made up of 1192 small coral islands whose area is only 299 sq km.

12. The world’s highest point Mount Everest (+8848 m) and the lowest point Dead Sea (-400 m) are located in Asia. Dead Sea is called Dead Sea in English and it is a saltwater lake.

13. Asia is the only continent with a border with the other two continents – Africa and Europe.

14. Two of the world’s three largest economies: China (second) and Japan (third) are in Asia. Both Russia and India fall in the top 10.

15. The people of Asia consume 90% of the rice yield worldwide.

16. Nepal is the first country in Asia to give legal recognition to same-sex marriage.

17. The art of writing was invented in Asia itself.