Giraffe is an organism found in the jungles of Africa, belonging to the ‘Giraffidae‘ animal family. It is known for its distinctive anatomical structure. The giraffe with long legs and neck is the tallest creature on earth.

Many other features are found in the giraffe along with specific anatomical structure. Like a giraffe like a camel, it can survive without drinking water for long and can sleep standing like a horse. We are sharing many such interesting and informative information in this article. 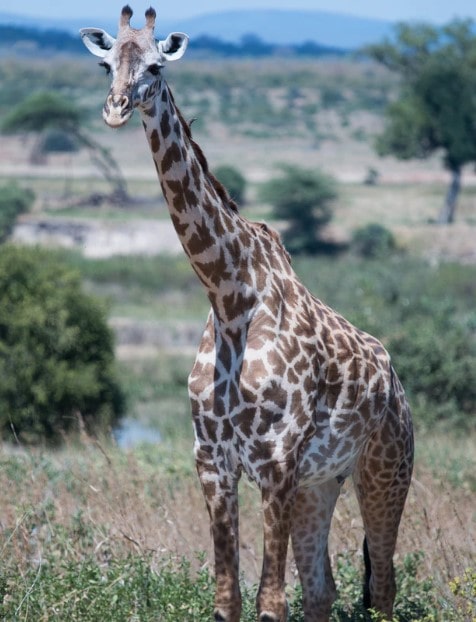 2. The group of giraffes is called Tower in English. This name has been given because giraffes are also tall like towers (such as mobile towers).

5. Some giraffes have been found whose necks are 6 feet long.

6. The legs of giraffes can also be up to 6 feet long, like necks. This means that most humans on Earth are smaller than the legs of a giraffe.

7. Giraffes only need to drink water once in a few days. Because most of their water needs are met by the grasses and plants they eat. You will be surprised to know that without drinking water, giraffes can last more days than camels.

10. A giraffe has to kneel on its front legs or knees to drink the water present on the ground because its 6-foot-long neck is short to reach the ground.

12. 50% of giraffes fall prey to animals like leopards and wild dogs within 6 months of their birth.

13. Giraffes have become extinct in 7 countries in Africa due to hunting and other reasons.

14. Before sexual intercourse, the female giraffe urinates in the mouth of the male giraffe.

15. In Mozambique, Africa, electric wires are placed at least 12 meters high in forests where giraffes are found in large numbers. This has been done so that these animals are not harmed.

19. There are 9 species of giraffes worldwide, which vary according to their size, skin, color and habitat.

20. Giraffes are found mainly in the plains or scattered forests.

22. Giraffe is a vegetarian animal. Its main diet is the leaves of acacia or cucumber tree.

23. Giraffe is the largest surface organism to ruminate. Usually they swallow about 30 kg of food at a time and then ruminate.

24. Giraffes require more than 75 pounds of food a day. This means that they spend most of their time in food.

25. However, it is believed that giraffes do not cough. But scientists have discovered that they sometimes make a cough-like sound to attract a female.

26. However, it is believed that giraffes do not cough. But scientists have discovered that they sometimes make a cough-like sound to attract a female.

27. Within 10 hours of birth, children of giraffes start moving.

32. A giraffe has 32 teeth in its mouth like humans. Although his mouth looks quite different from humans. Their teeth are located towards the front of the lower jaw. But the teeth in the upper jaw are towards the back. Their upper jaw has a hard plate-like tissue instead of front teeth, which helps in holding the leaves.

33. Giraffe’s 12-inch hooves are so sharp / sharp, they can even kill a lion if needed.

36. The sound of a giraffe is so slow that it is impossible to hear it by humans. They often make very slow sounds like chunks or flutes.

37. When the female giraffes leave in search of food, one of the groups stops to take care of the children.

38. Giraffes of the same sex have also seen physical relationships among themselves. Such relationships are found more in male giraffes than in females.

39. Giraffe is the national animal of Tanzania.