The statue of Zeus at Olympia is one of the seven wonders of the ancient world. The statue was built by the ancient Greek sculptor Fidaeus in 432 BC and completed its construction after nearly 12 years of hard work. 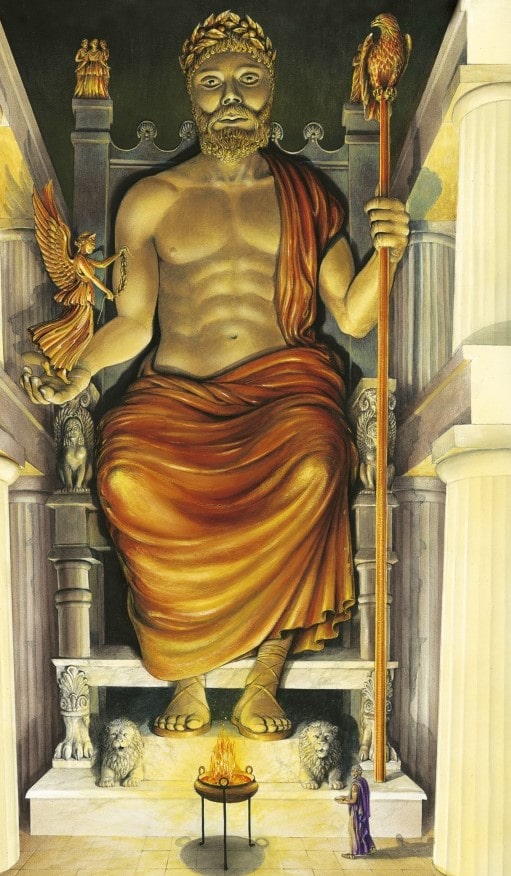 At present, this idol does not exist among us. It is said that this idol was burnt down in 475 AD. Zeus is considered the king of the gods of ancient Greek. Olympic games in ancient Greek were held in honor of the god Zeus.

In ancient Olympia, a temple was built in honor of the god Zeus which was built in a small forest situated between two rivers. Around 432 BCE, the Greek most famous sculptor Phidias (Phidias) arrived in Olympia to sculpt the god Zeus. Phidias established his workshop next to the temple in which he started making parts of the statue.

When the idol was prepared after 12 years of hard work, everyone was surprised to see its beauty and grandeur. The statue depicts Jesus in a seated position. The height of the statue was about 42 feet.

In the right hand of the statue of Zeus was held a small statue of the Goddess of Victory and in the left hand was the scepter, made of rare metals and jewels. A pool was made in front of the feet of the idol which was filled with olive oil. This was done so that the moist climate of Olympia would not encroach on the ivory parts. Apart from this, due to this pool, the light changed and fell on the idol, which further increased its grandeur.

By 392 AD the Greeks had been ruled by the Romans who believed in Christianity. He called off the Olympic Games because it was played in honor of a non-Christian god, Zeus. Apart from this, he also associated it with idolatry.

There is no clear mention of what happened to the statue of Zeus after 392 AD. This idol is said to have been destroyed when Theodosius king ordered the destruction of all non-Christian temples in 426 AD. Some inscriptions also reveal that a Greek man named Lassus took it to Constantinople (Constantinople – present-day Istanbul) where the statue was destroyed in a huge fire in 475 AD.

Archaeological finds have unearthed the temple enclosure, the oil tank and the workshop of Phidias, but no part of the statue of Zeus, the king of the gods, was found.