The iron pillar standing in the premises of Vishnu Pillar (Qutub Minar) in the capital of India is a big surprise for today’s science. The scientist is surprised that this 6 thousand kg iron pillar is made of 98% iron, despite standing under the open sky without rust for 1600 years. 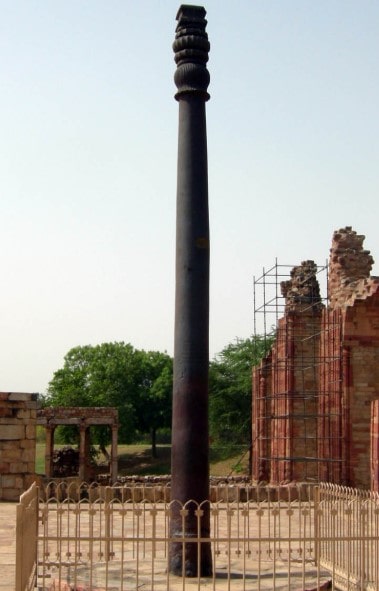 Who built the iron pillar?

This pillar was built in memory of Chandragupta Vikramaditya, the great king of Gupta dynasty. Maharaj Chandragupta Vikramaditya ruled from 380 AD to 413 AD. This iron pillar may have been built by his son and the next king of the Gupta dynasty, Kumaragupta. Maharaja Kumargupta ruled from 413 AD to 455 AD, then this pillar must have been built before 1604 years ago in 413 AD.

According to the inscription on the pillar, this pillar was built on top of the Vishnupad hill which was probably brought to Delhi in 1050 AD by someone else. The Vishnuvad hill region is now located near the city of Udayagiri in Madhya Pradesh, which is located almost on the Tropic of Cancer.

Scientists still surprised about the technique of building the iron pillar

According to Doctor BB Lal, this pillar is formed by adding 20-30 kg pieces of hot iron. 1600 years ago, the technique of adding hot iron pieces is also a surprise, because not a single joint is visible anywhere in the entire iron column.

Robert Hadfield analyzed the metal and said that usually a temperature of 1300–1400 ° C was required to mold steel to a certain size. But the steel which is placed in this column is called Rat Iron which requires temperature above 2000 degree centigrade to thaw. Wondering if there were no high-temperature furnaces like today, then how was it molded?

After much research, IIT Kanpur specialist Dr R Balasubramanyam has discovered that there is a thin layer of iron, oxygen and hydrogen on the pillar which has kept it from rusting.

The pillar has an inscription written in the Brahmi script of the Gupta period, which tells that it was built in memory of any king.

The script written on the pillar was converted into Devanagari script by Pandit Bakan Rai ji in the year 1903 and then translated it into English.

The inscription reads – “On the arms of the king who drove the organized enemies into the battle of Bengal, the article of fame is written with a sword, who crossed the seven estuaries in the Indus river and won Bahilco, whose power is known today. Is also settled in the South Sea, whose calm has been destroyed by the heat of Mahadavanal as Pratap destroyed the enemies, the king left the earth after being disgusted and wandering in the world earned by his actions, his fame is on earth. Having established a unbroken kingdom in the world with his muscle, the full moon, consumed for a long time, fell in Vishnu’s heart and installed the Vishnu flag on the Vishnu post hill. “

A part of the iron pillar is slightly uprooted which clearly shows that a cannon has tried to blow it from close range. Although there is no clear evidence as to who fired the cannon, most historians believe that in 1739, during his attack on Delhi, Nadir Shah ordered to fire the cannon.

When Nadir Shah came to know that this pillar belonged to a Hindu king, he immediately ordered it to be blown up. While firing the pillar, only a part of the nearby mosque was damaged on Kharoch Eye, after which Nadir Shah changed his intention to blow the pillar.

It is said that if you touch this pillar with both hands at the back, the wishes are fulfilled, but now you will not be able to do so because after the damage to this pillar by tourists in the year 1997, a fence of iron was erected around it.