Kangaroos are creatures of Marsupial class. Marsupial is a class of mammal animals that move their children in a bag near their stomachs.

In this post you will get information about the size, habitat, behavior, food, progeny origin and ancestors of kangaroos. 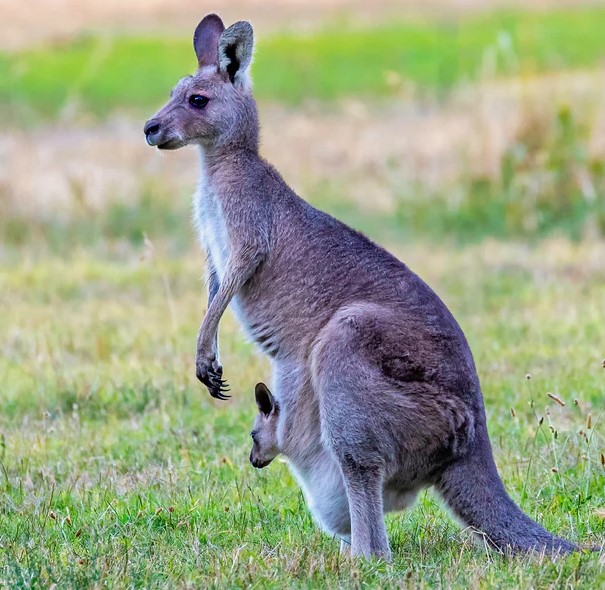 The red kangaroo is the largest species of kangaroos, ranging in length from 3 to 5 feet and a half feet from head to back. Their tail increases their length by 2 to 3 feet. Red kangaroos weigh an average of 90 kg.

The smallest kangaroo in the world is musky rat-kangaroo whose length is just 6 to 8 inches. Their tail increases their length by 5 to 6 inches and their average weight is about 350 grams.

As you know kangaroos are only found in Australia. 21 species of them have been discovered here, including 158 species and tribes. The way of living of each species is different.

Kangaroo is the only one animal that jump and walk. Their hind legs help them to do so. Kangaroo can jump 15 feet i.e. 7 meters long at a speed of 32 kilometers per hour. The kangaroo maintains its balance with its tail while bouncing and while sitting.

Kangaroos are social animals and prefer to live in groups. They consider it their duty to protect each other while in a group. If they feel any danger, they hit both their hind legs vigorously on the ground so that other companions can be warned.

Although kangaroos are very peace loving animals, but for their self-defense they can also hit someone with their hind legs vigorously.

What does kangaroo eat?

Kangaroo are vegetarian. They usually eat grass, flowers, leaves, ferns and mosses. Many times they also eat insects by mistake.

Even though kangaroos are vegetarian animals, people of Australia eat them with great fervor. Their tail juice is drunk with great taste.

Kangaroos are known for the fact that the female can keep her children in the pouch. A female kangaroo remains pregnant for 21 to 38 days and can give birth to 4 children at a time.

The newly born child of the kangaroo is called Joey. The mother keeps Joey in her bag for 120 to 450 days and then the child becomes able to walk on her own.

The baby is safe inside the pouch in which he drinks milk through his mother’s breasts. Joey dirty the pouch with his feces and urine. The bag absorbs some dirt and the rest of the mother cleans it with her tongue.

Joys grow up quickly. In 14 to 20 months the female joey and in 2 to 4 years the male joey becomes fully young.