The octopus is a marine creature known for its superior body composition and organization. This creature can grow from 10 cm to 50 feet tall. In Hindi it is called Ashtabahu because it has eight arms. But actually the arms are 6, the other two are its legs. All these arms and legs are flexible which help the octopus to move. Below is some interesting information about Octopus, which will increase your knowledge about this creature. 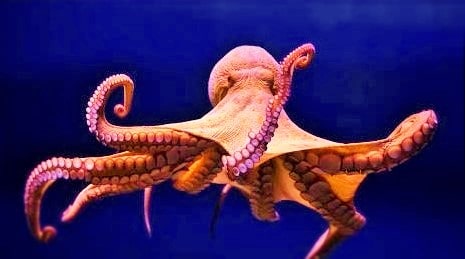 (1) The number of hearts of Octopus is 3. Apart from this, its blood is also blue.

(2) The newly born Octopus is just the size of a flea. Let us know that the size of Flea is only 1.5 to 3.2 millimeters.

(3) The oldest discovered skeleton of Octopus is 296 million years ago.

(4) Octopus wrestling was quite prevalent in the 1960s in Western countries. In this wrestling, a wrestler was fought with an Octopus in shallow water and if the wrestler managed to drag him out of the water to the surface, his victory was considered.

(5) Scientists have so far discovered more than 300 species of Octopus.

(6) In North and South Korea, this creature is eaten alive.

(7) Octopus is an intelligent creature. For this reason, in many countries, it is illegal to perform surgery without fainting it.

(8) Some species of Octopus are so poisonous that a person can die by simply biting them.

(9) If an Octopus is feeling very hungry, he can also eat one of his arms or legs.

(10) Many times the female Octopus kills and eats the male on the pretext of sexual intercourse.

(11) The life of this strange creature is very short. Many species can live for only six months.

(12) Large-sized Octopus are known to capture and kill sharks.

(14) The skin of this creature can change its color more than 170 times in an hour.