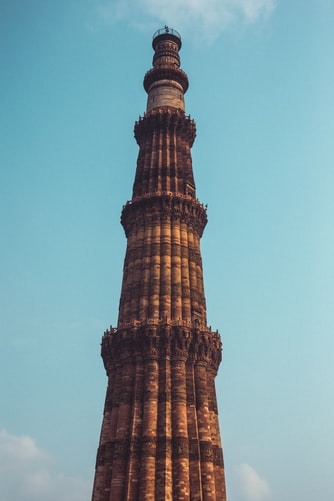 1. Qutub Minar is situated in Mehrauli, south of Delhi, the capital of India. This is the tallest tower in the world made of bricks, which is 72.5 meters high OR 237.86 feet high.

3. It is said that Qutubuddin Aibak started construction of Qutab Minar in 1193. He could make only the first floor. After this, Iltutmish, who became the Sultan of Delhi, got the three floors constructed. After this, in 1368, Ferozeshah built the 5th and last floor.

4. Qutub Minar was damaged by earthquake in 1505 when it was repaired by Alexander Lodhi.

5. It is said that the Qutub Minar was used as the tower of a nearby mosque and azaan was offered from here. But even if someone stands at the last floor and shouts with full power, it would be difficult to hear the sound of that person.

6. Qutab Minar is made from red and pale yellow stones. Quranic verses have been written on it.

7. It is believed that the stone and other materials used in the construction of this tower were collected by breaking 27 Hindu temples.

8. Near the tower is an iron pillar built in the fourth Satabadi. This pillar was built in memory of Chandragupta Vikramaditya, the great king of Gupta dynasty. Maharaj Chandragupta Vikramaditya ruled from 380 AD to 413 AD. This iron pillar may have been built by his son and the next king of the Gupta dynasty, Kumaragupta. Maharaja Kumargupta ruled from 413 AD to 455 AD, then this pillar must have been built before 1604 years ago in 413 AD.

Claims of Hindu Side

1. According to the Hindu side, Varahamihira, who was another astronomer in the Navratnas of Emperor Chandragupta Vikramaditya, built this tower. The real name of this is Vishnu Pillar.

2. Varahamihira had constructed 27 artistic parishes for the study of the minarets around the tower. There were pictures of Hindu gods and goddesses on these grounds. These 27 circumstances were broken and it was written on Qutub Minar that Qutubuddin broke 27 temples.

3. The tower seems to be part of the surrounding construction, not built separately, it originally had seven floors. On the seventh floor, there was a statue of Brahma ji with Vedas in his hand which was broken, there were some constructions with the statue of Vishnu on the sixth floor, they must have been removed.

4. The biggest evidence of this is the iron pillar standing on the side of which is written in Brahmi language that the Garuda flag was installed by Emperor Chandra Gupta Vikramaditya (380-414 AD).

5. The great emperor in whose court was the great mathematician Arya Bhatt, astronomy and building expert Varah Mihir. During the reign of such a kingdom in which an iron pillar was established, would there have been a lone column in the forest? There must have been other construction around as well.