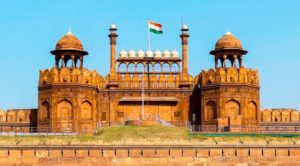 1. Shah Jahan started the construction of the Red Fort in 1638 which was completed in 1648.

2. When the Red Fort was inaugurated in 1648, its main rooms were decorated with precious curtains. It was decorated with Turkish velvet and Chinese silk.

3. About one crore rupees were spent in making it. Accordingly, it was the most expensive fort at the time.

4. Half of the one crore rupees was spent in building its magnificent palaces.

2. The Red Fort is also built on the banks of river Yamuna like Taj Mahal. The trench enclosing the Red Fort was filled with water from the Yamuna itself.

3. On 11 March 1783, the Sikhs made a ruckus at the Red Fort and liberated it from the Mughals. The head of this feat goes to Sardar Baghel Singh Dhaliwal.

4. Red sand stones were used to build the Red Fort, due to which it was named Red Fort.

6. In 1739, Nadarshah attacked Delhi and caused great damage to the gardens and walls of the Red Fort. Apart from this, he also massacred Hindus for three days in Delhi.

8. After destroying the residential places and gardens of this fort, the British made the parade grounds for the army there.

10. In 2000, Lashkar-e-Toiba militants attacked, in which one civilian and 2 soldiers were died. This attacked was done, in December 2000 to disrupt the ongoing India-Pakistan peace talks.

Claims of hindu side

2. According to the claim, Shah Jahan had made changes in some of its pre-made parts and constructed some garderns.

3. The statue of elephants is inscribed on the main gate of the Red Fort. The Hindu Rajputs were famous for their love for the king Gajo (elephants).

4. Not a single Islamic inscription describes the Red Fort.