Kabir was a prominent poet and a social reformer. Almost everyone consider Sant Kabir das ji as God because his life was precisely focused on spiritual life. His main language was Sadhukkadri, but in his couplets and posts, a glimpse of all the main dialects of Hindi language is visible. Kabir’s influence is found in Hinduism, Islam and Sikh religion. 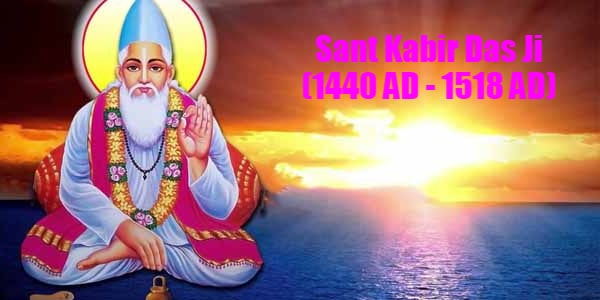 There are conflicts among historians about when and where Kabir was born. Three opinions about the place of birth of Kabir emerge: Maghar, Kashi and Belhara villages of Azamgarh. Most historians believe that Kabir was born in Kashi (Varanasi). This thing is known from this line of Kabir’s couplets.

According to a popular legend, Kabir was born on 1440 AD to a poor widow Brahmin. Whom Rishi Ramanand ji had mistakenly blessed to be a daughter. The widow Brahmini had left the newborn baby near Lahartara Tal due to the worldliness of the world. Perhaps this is why Kabir was seen cursing the worldly traditions.

According to a legend, Kabir was raised in a Muslim family in Neeru and Neema. Neeru found this child near Lahartara Tal. There is not a definite opinion about who Kabir’s parents were. Historians have their own opinions about whether Kabir was the real child of Neeru and Neema or they only brought them up.

It is said that Kabir was not interested in reading and writing. As a child, he was not fond of sports in any way. Kabir had to wander from day to day to arrange food throughout the day. That is why Kabir could never take a book education.

Today the Kabir whose couplets we read is not written by Kabir himself but by his disciples. His disciples had done the work of writing the couplets spoken from Kabir’s mouth. His disciples were Kamatya and Loi. The name Loi has been used many times in Kabir’s couplets. Possibly Loi was both his daughter and student.

Kabir was raised in a very poor family. Where education could not be thought of. During that time Ramanand ji was a famous scholar and pandit of Kashi. Kabir requested many times to visit his ashram and meet him, but he was banished every time.

One day Kabir saw that Guru Ramanand ji goes to the pier (ghat) every morning for 4-5 am to take a bath. Kabir laid a fence on the entire pier (ghat) and left only one part of the fence open. Kabir slept there at night. When Ramanand ji came to bathe early in the morning, after seeing the fence, he left the same place from where Kabir had left the open space. In the darkness before sunrise, Guru did not see Kabir and climbed on Kabir’s feet. As soon as Guru climbed on foot, Ram Ram Ram came out of Kabir’s face.

On seeing Guru directly, Kabir became very happy, he also got his darshan. After this incident, Ramanand Ji made Kabir his disciple.

According to a post by Kabir Das, his religion is the right way to live life. He is neither a Hindu nor a Muslim by religion. Kabir Das ji has been quite abusive of religious rituals. He has also opposed the evil practices going on in the name of religion. The birth of Kabir Das was contemporary with the founding of Sikhism, that is why his influence is also seen in Sikhism. Kabir had to face opposition from Hindus and Muslims many times during his lifetime.

Sant Kabir Das ji died in 1518 AD in Maghar. Kabir’s followers were equal in both Hindu and Muslim religions. When Kabir died, his funeral was also disputed. His Muslim followers wanted him to be cremated in Muslim manner whereas Hindus wanted to perform Hindu rituals. According to this story, due to this dispute, a sheet flew from his body and divided the flowers lying near his body by Hindu Muslim half. His tomb has been built at Kabir’s death place.