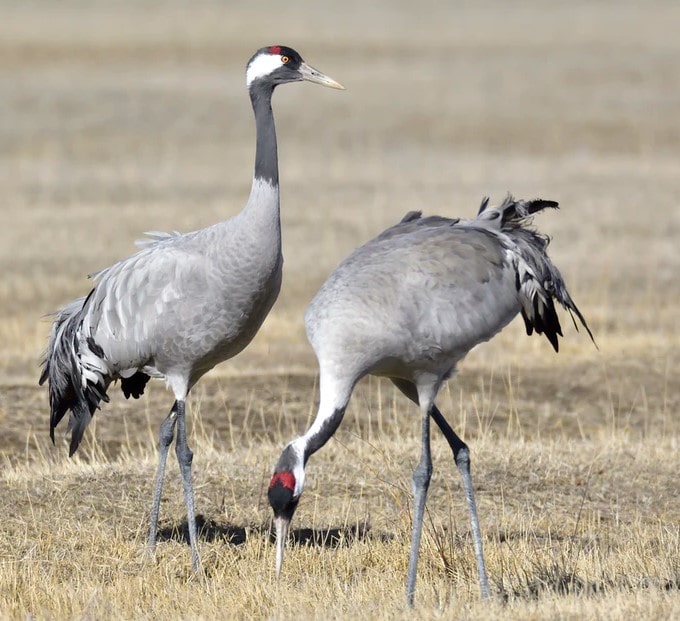 You will be happy to know that Sarus bird is found in India at the present time. Earlier it was also found in some other countries, but now they are limited to India.

Their number ranges from 15 to 20 thousand in India and it is found more in Uttar Pradesh, Gujarat, Rajasthan, Madhya Pradesh, Bihar and Northern Maharashtra. They can also be seen occasionally in Haryana and Jammu and Kashmir.

Sarus are permanent residents of India and often prefer to live in the same geographical area. They often make their habitat on marshy lands, flooded places, ponds, lakes, paddy fields and secluded places. Their nests are found near shallow water with green bushes and grass. The female plays an important role in building the nest.

Sarus usually live in groups of 2 to 5. They are mainly vegetarian and eat seeds and so on. Sometimes they even swallow small creatures.

Sarus bird is related to Ramayana

When the story of the Ramayana begins, the narration begins with a pair of Sarus. Maharishi Valmiki is looking at this lovely couple, then suddenly a hunter takes a Sarus as his prey with an arrow. That is when the second Sarus loses his life in his partner’s disarray. Maharishi Valmiki curses the hunter.

Sarus is the symbol of love

Sarus is considered a symbol of love and dedication. In his life time, once he becomes his partner, he lives with him. If one partner dies for some reason, the other does not make another partner the whole life. He slowly stops eating and drinking water, leading to his death.

When the male Sarus raises the beak towards the sky and makes a long and buzzing sound, the female responds to him twice in short tones. These sounds of Sarus can be heard far and wide.

In India, this bird is considered a symbol of marital love and in many places it is a tradition for a newly married couple to see the Sarus couple.

The scientific name of Sarus is ‘Grus antigone’. Their average weight is 6.35 kg. They can be 5 to 6 feet in length as we mentioned earlier.

There are no major differences between males and females, due to which it is difficult to identify their sex, but females are slightly smaller than males so that they can be easily identified.

Their wingspan extends up to 250 cm while flying.

How does Sarus Breeding

The rainy season is usually the mating period of Sarus. They also dance before mating.

The female lays two to three eggs at a time, which the male is responsible for protecting. A month later, chicks emerge from the eggs. For the first 4-5 weeks, the parents nurture them and bring them food which includes seeds, insects, plant roots. After this, the chickens learn to get their own food.

children become self-sufficient 3-4 months after birth and can raise themselves without their parents. The average life span of Sarus is 16 to 18 years.

It is very sad that the number of Sarus in India is decreasing day by day. Because of this, they have been declared threatened species. Let me tell you that the Sarus bird in Malaysia, Philippines and Thailand is completely out and is on the verge of ending in India.

Constant shortage of forests, spraying of pesticides in the fields, hunting, changing environment, smuggling of chicks are causing the destruction of Sarus. Wild cats and foxes sometimes carry their children. By the way, they do not have any danger from predatory birds like crows and eagles but they find themselves helpless in the flock of wild dogs.

By the way, the species of Sarus is more vulnerable to humans than to animals. There is a need for major changes in our environment and society, which is in our hands. But we do not believe that!