Somnath Temple is an important ancient Hindu temple, which is counted as the first Jyotirlinga among the 12 Jyotirlingas. Jyotirlinga is the place where Lord Shiva himself appeared.

Somnath Temple is located on the seashore in Veraval city of Saurashtra region in the state of Gujarat. The present-day Somnath Temple has been built by Sardar Vallab Bhai Patel after independence of the country. Earlier in history, this temple was built many times and every time a Muslim ruler broke it.

According to Hindu texts, the Somnath temple was founded by MOON himself. ‘Som’ is another name of MOON.

According to the stories, Chandra Devta married 27 daughters of Daksaprajapit, but Chandra loved Rohini more than all of them. Seeing the injustice being done to the rest of his daughters, Dakshaprajapati cursed Chandra that from now on every day your brightness (brightness) will decrease.

After the removal of the curse, the lunar deity Somaraja built a gold temple there and this temple came to be known as Somnath Temple. Somnath means ‘Nath (God) of Soma (Chandraman)’. Chandraman means Moon. 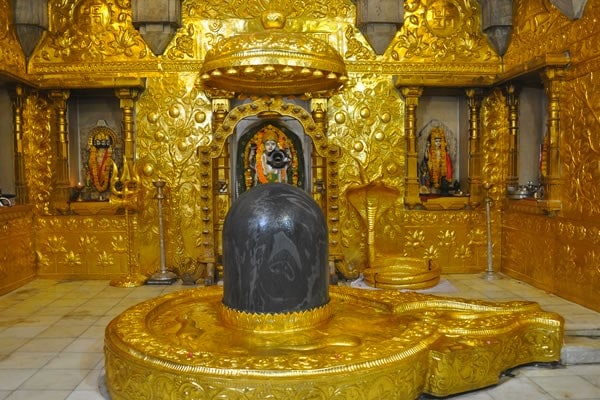 No historical evidence is available about when Somnath Temple was built for the first time, but it is still known that in 649 AD it was rebuilt by the Maitric Kings of Vallabhi. This temple was torn down by the Muslim Subedar al-Junaid of Sindh in 725 AD.

The temple was rebuilt by Pratihara king Nagabhatta in 815 AD. The fame of this temple spread far and wide. It was very famous for its wealth. In 1024 AD, Mahmud Ghaznavi along with 5 thousand of his companions attacked the Somnath temple and slaughtered 25 thousand people and took away all the wealth of the temple.

After plundering the temple of Mahmud, King Bhimdev rebuilt it again. In 1093, Siddharaj Jai Singh also supported the temple’s reputation and its sanctification. In 1168 AD, Vijayeshwar Kumarapal and King Khangar of Saurashtra also had the Somnath temple beautified.

In 1297, when Nusrat Khan, the commander of Sultan Alauddin Khilji of the Delhi Sultanate attacked Gujarat, he broke the Somnath temple again. He also ruined the holy Shivling and looted all the wealth.

The order of building the temple by Hindu kings and breaking it by Muslim kings continued. In 1395 AD, Sultan Muzaffarshah of Gujarat looted the temple, and in 1413 AD, his son Ahmad Shah did the same.

Somnath Temple was broken twice during the period of Aurangzeb, the great emperor of the Muslims, first in 1665 AD and second in 1706 AD. After the temple was torn down in 1665 AD, when Aurangzeb saw that Hindus still come to worship at that place, he again attacked there in 1706 AD and the people were slaughtered.

When a large part of India came under the control of the Marathas, in 1783, another temple of Somnath Mahadev was built by the Maratha queen Ahilyabai of Indore. This temple is built at a distance from the original temple.

After India gained independence, Sardar Vallabhbhai Patel ji liberated Junagadh from Pakistan on 9 November 1947. He visited Somnath and took the sea water and resolved to build a new temple. The 1950 temple was rebuilt after his resolution.

In 1951, the first President of India, Shri Rajendra Prasad Ji established Jyotirlinga in the temple and this temple was completely completed in 1962.

There were many attacks on Somnath temple but the Mahmud Ghaznavi’s attack is the most talked because during this attack Mahmud Ghaznavi killed thousands of people and apart from mugging the wealth of the temple, he also dismembered the holy Shivling.

Mahmud Ghaznavi was the king of the Ghazni kingdom of Afghanistan who attacked India 17 times for money, in 1024 AD he attacked the Somnath temple with around 5000 companions, at that time about 25 thousand people came to worship in the temple.

Some interesting facts of Somnath temple

2. The work of arranging and operating Somnathji’s temple is under the Somnath Trust. The government has managed the income by giving land, orchards to the trust.

3. The temple has a Mahasangam of three rivers Deer, Kapila and Saraswati.

4. This temple is open daily from 6 am to 9 pm. There are three aartis here everyday, at 7 in the morning, at 12 in the afternoon and at 7 in the evening.

5. Due to security reasons, non-Hindus have to take special permission to visit the temple.