Sparrow has not known where it has disappeared today. Mobile phones, towers, pesticide use etc. are being blamed for their disappearance. In childhood, it could easily be seen in flocks of 8 – 10, but now it is rare. 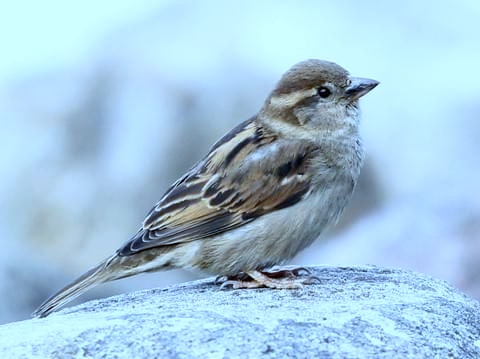 How high can a sparrow fly?

1. Every year on 20 March, “World Sparrow Day” is celebrated in different parts of the world, it was started in 2010 considering the declining population of sparrow as a worry.

4. According to scientists, there are about 43 species of sparrows. Its numbers have come down by 60 to 80 percent in the last few years.

5. Male and female sparrows can be distinguished by their color: – The male sparrow has a tobacco-colored back and a black stripe on the neck, while the females have both the back and the stripes in brown colour.

7. Sparrow’s Food: Sparrows are naturally carnivorous, but have changed their habits since they started living close to people. Sparrow bird food is mainly moths and other small insects, but they can also eat seeds, berries and fruits.

8. In the late 1950s, the Chinese government started a campaign to kill millions of sparrows, because sparrows used to eat the crop, but the results came to the end as soon as the campaign ended because millions of sparrows were killed in China after killing sparrows The number of insects increased greatly and due to this the situation had become famine. .

9. Very few eggs of the sparrow contain the DNA of both parents. Most have only their mother’s DNA.

10. Male sparrows are responsible for sparrows nesting and they try to attract female sparrows while nesting.

11. On average, a female sparrow lays 3 to 5 eggs every year. After 12 to 15 days one of the sparrows is born from the egg. Both males and females take care of the mill’s eggs and their baby. Only 15 days after its birth, a sparrow becomes capable enough to leave its nest.

13. Most sparrows are lethargic, rarely flying 2 km (1.2 mi) away from their birthplace.

14. Even though they are not counted in water birds but still they have the ability to swim. They swim inside the water to go from one place to another.

15. There are 4 lakh photoreceptors per square millimeter in the retina of the sparrow’s eye.

16. When sparrows are unhappy, they flick their tail repeatedly to reduce their stress.

17. Sparrows usually move by jumping instead of walking directly on the ground.

18. Animals like Cats, dogs, snakes, foxes mostly hunt sparrows. Sparrow is threatened by some of these animals.

19. One of the main reasons for the sparrow’s declining population is the radiation emanating from the mobile tower, because sparrows usually hatch after hatching for 12 to 15 days, but the eggs do not hatch even after 30 days of hatching near the mobile towers.