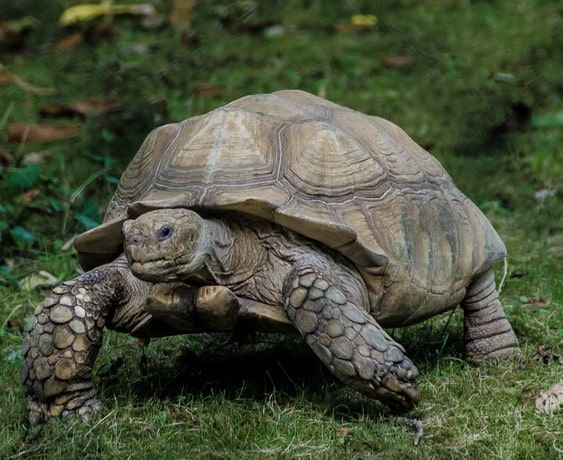 1. Turtle is a very ancient creature recognized because of its shield-like armor. Its armor develops from its ribs, which helps them in protecting.

3. Some turtles may be more than 100 years old. There was a turtle named Harriet, which is said to have been originally discovered by Charles Darwin in 1835 and later brought to Australia’s zoo. He died in 2006 and was 175 years old at the time.

4. The tortoise is one of the first living beings to go into space. In 1968, the Soviet Union embarked on a space trip with several animals, including two turtles. After returning to space for a week, the body weight of both these turtles was reduced by 10%.

5. Even if the turtle’s mind is separated from its body, they can survive for 6 months.

6. The shell of a turtle consists of 60 bones which are connected to each other.

7. Turtles can hold their breath for a long time. This is why they stay inside their shell for so long. Whenever they feel threatened, they hide inside their shell, but before that they exhale a long breath whose voice can be heard.

8. The color of their armor can be determined by the temperature of the area where they live. Light colored shell shows that live in warm place. While the dark color suggests that the turtle lives in a cold area.

9. Their blood is cold and it is believed that the life of a cold-blooded creature is very long.

10. If you want to catch a turtle, then hold it with both your hands, keep one hand under its body because they get scared when they feel the wind beneath them.

11. Giant turtles are also found in some tropical islands called Giant Tortoise. Their height can be 6 feet and width can be from 4 to 5 feet. Not only this, their weight can be more than 400 kg.

12. Turtle of Galápagos species also hunts birds. For this he drags the birds under his shell and crushes it with his weight.

13. You will be surprised to know that it took 300 years for the scientific name of Giant tortoise to be decided. This is because their meat was very tasty and whenever a turtle was sent to Europe for a sample people would kill and eat it on the way.

14. They have great ability to see and hear.

15. 40% of the body weight of a turtle is water, in fact, desert turtles store a large amount of water during rainy days or from different water sources so that it can be used during dry days.

16. World Tortoise Day is celebtrated every year on 23 May.

17. What is the difference between Tortoise and Turtle? The main difference between these two is that Tortoise is always on the ground, they live in the forest, desert etc. and when thirsty, then only go near the water. While Turtle is an aquatic creature, they mostly live in water and come to the earth only when they have to lay eggs.

18. Turtles have very strong mouths but do not have teeth.

19. Except Antarctica, they live on almost all continents whose temperatures are warm enough for their reproduction.

20. A sea turtle named Hawksbill eats only those organisms that are poisonous.

21. The armor of turtles is very strong. It has evolved over time to protect them while living under the ground in difficult weather conditions. When a turtle is in danger, it hides its head and legs inside the armor.

22. Tortoises are cold blooded creatures like other crawling creatures, that is, they become dormant in winter.

23. The first species of turtle was born 150 million years ago. Over time many of its species came into existence and went extinct.

24. At present, more than 320 species of turtles exist, many of which are on the verge of extinction. Preserving them is a matter of concern.

26. Turtles do not have teeth in their mouths but have a bone plate like bone which helps them in chewing food.

27. Some species of turtles live on land and some in water. There are many species that can live both in water and on land.

28. Turtles living on the land are vegetarians and turtles living in water fill their stomachs with fish and snails.

29. Turtles usually do not make any sound, only during sex, the male tortoise is heard like a car. The sound of dinosaurs was made in the film ‘Jurassic Park’ with this same car.

30. Turtles produce new babies with the help of eggs. When a female turtle has to lay eggs, she first digs a soil at one place and then lays eggs.

32. Presently many small species of turtles are being reared as a domestication.

33. The life span of turtles depends on their species. Some larger species can live up to 150 years.

34. Turtles are known to be a dull animal as they move very slowly. Turtles can move at a speed of more than half a kilometer per hour.