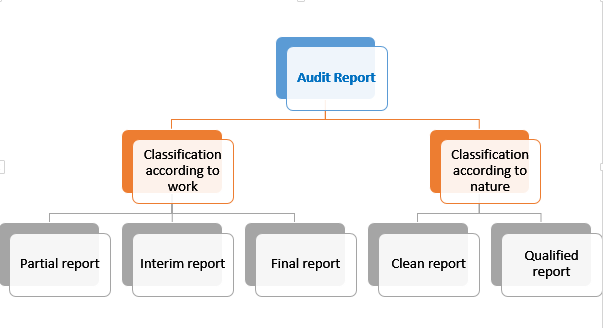 Classification according to work

Classification according to nature

(1) Clean Report: If the auditor after verifying the books of accounts comes to the conclusions that the books of accounts have been appropriately maintained, there are no mistakes, inadequacies and frauds, the profit or loss as shown by the profit and loss account and the financial position as per the Balance Sheet are correct which means that the auditor has no complaints or suspicions, then in such a situation the report issued by him is called a clean report. It is also known as an unqualified report.

(2) Qualified Report: If during the audit the auditor finds any discrepancies, irregularities frauds or other deficiency in the books of accounts, i.e., he is not fully satisfied about the accuracy of the Profit and Loss Account and Balance Sheet of the organisation then he should write in his report the various points which make the accounts of the organisation inaccurate.