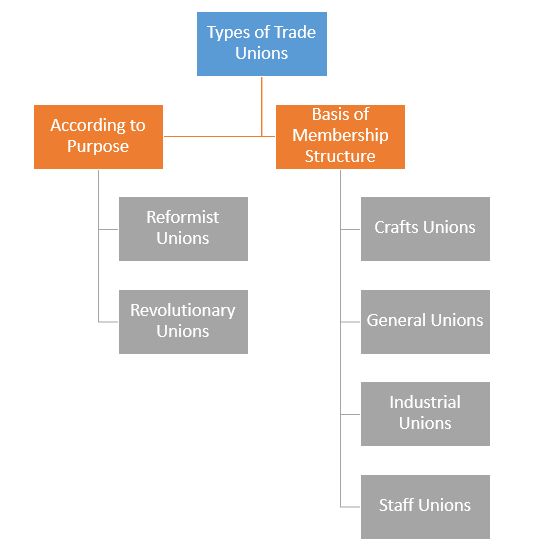 Union Classified According to Purpose

(1) Reformist Unions – Reformist unions aim at preservation of the capitalist economy and the maintenance of competitive production based employee relations. They would like to continue the existing, social, economic and political structures. Trade unions seek to improve the wage level, working conditions, quality of work life by increasing the productivity level and by bargaining for a share in the increased productivity. Reformist unions are further classified into –

Union Classified on the Basis of Membership Structure

(1) Craft Unions – It is the simplest form of the trade union. It is usually formed by workers belonging to the same craft, occupation or specialisation no matter in what industry, or trade they are employed. These unions are called as horizontal unions. The basic logic behind the formation of such unions is that the workers belonging to the same craft do face similar problems – mostly non-managerial personnel form such unions. Examples of craft unions are Drivers Associations, Signalling Staff Union in Indian Railways, etc.

(2) General Unions – If the workers of any industry, any region and of any job or occupation form into one union in order to protect the overall interests of the workers, such unions are called general unions. The Jamshedpur Labour Union, whose membership includes workers engaged in different industries and crafts of Jamshedpur, is an example of a general union.

(3) Industrial Unions – If the workers of different categories form a union, that union is called ‘industrial union’. These unions are also called “Vertical” unions. The logic behind the formation of these unions is that workers of the same industry have the common bend and they are governed by same rules and regulations and are administered by same management. Moreover, the problems of all the same industry are more or less common. The importance of these unions has been increasing in recent times. The Rashtriya Mill Mazdoor Sangh and Girni Kamgar Union at Bombay belong to this type.