Vinayak Damodar Savarkar has been the controversial personality of the Indian freedom struggle. While many people consider him a great revolutionary and a patriot, there is also no shortage of people who consider him communal and associate them with the assassination of Mahatma Gandhi. Whatever the truth is, Savarkar get the credit for propagating the Hindu nation and the ideology of Hindutva. 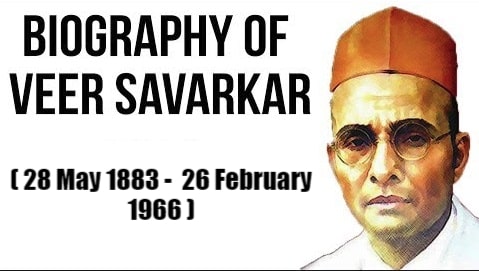 Veer Savarkar had two brothers. In which one name was Ganesh Savarkar and the other name was Narayan Savarkar. When he was only nine years old, his mother died due to cholera epidemic. And about seven years after that, his father also died in the year 1899 due to plague epidemic. After the death of his father, the elder brother Ganesh Savarkar took over the charge of running the family.

In 1901, Veer Savarkar was married to Yamunabai. He had two sons and a daughter. The sons were named Prabhakar, and Vishwas while the daughter’s name was Prabha Chiplunkar. Yamunabai’s father helped Veer Savarkar greatly and also borne the expenses of his higher education.

Veer Savarkar’s university education was carried by his father-in-law. He received his BA (Arts field) from Ferguson College. In the year 1909, Veer Savarkar went to London and obtained a law degree.

When Veer Savarkar was just 12 years old, he, along with his friends, tried to break the mosque in his village during the Hindu-Muslim riots. This incident somewhere reflects their fanatical thinking and disharmony towards Muslims. But some historians believe this to be the cause of the Muslim boys.

Studying at Ferguson College, he mobilized students and founded the Abhinav Bharat Organization in the year 1904 to create an army of freedom fighters. During this time Savarkar read many books related to law, history, and philosophy and also trained in gymnasiums. These days he used to discuss Lokmanya Tilak for India’s independence.

In the year 1905, he burnt Holi of foreign cloth in protest against the partition of Bengal. Years later, Mahatma Gandhi also did the same in the Swadeshi movement. The incident angered the college administration and Savarkar was dismissed. But at the pressure of the remaining students and at the request of Tilak, they were allowed to take the exam and they passed with good numbers.

After graduation, he was awarded scholarship by Shyama ji Krishnavarma on the approval of Tilak ji and he left for London to study Bar-at-Law. The British authorities present in India sent information to keep a close watch on them in London.

In London he started living in India House. There he met students like Lala Hardayal, Madan Lal Dhingra, etc. Savarkar connected everyone to Abhinav Bharat.

During his stay in London, in the year 1908, Veer Savarkar also wrote a book, named “First War of Independence”. However, the British authorities confiscated it and the book could not be published. These days Savarkar read Herbert Spencer, August Comte, and Majini to formulate the theory of innovative India.

Madan Lal Dhingra, one of Savarkar’s followers and best friends, shot and killed William Hurt Curzon Vayali on 1 July 1909. That day, Curzon accompanied his wife to a function organized by the Indian National Association at the Imperial Institute and while he was leaving the hall, Dhingra opened fire on him. In order to save Curzon by mistake, a Parsi doctor who came in the middle was also shot and he also died.

Madan Lal Dhingra was hanged on 13 March 1910 for the murder of William Hurt Curzon Vayali. Savarkar opposed this and also raised a voice against an Indian party that considered Dhingra wrong. After this incident Savarkar was caught in the eyes of the British officers, so he immediately moved to Paris where his companions Hardayal and Krishnavarma, already persecuted by the British, took refuge.

While Savarkar was in Paris, Anant Kanhare, a member of Abhinav Bharat, killed a British official named Jackson. The British considered Savarkar guilty of these murders and when he came to Britain on 13 May 1910, he was arrested.

Savarkar’s Arrest And Attempt To Escape

Veer Savarkar came from Paris to London on 13 May 1910 and was arrested as soon as he arrived. When Javed Savarkar heard that he would be taken by ship to India via Marseille, the second largest city of France, he immediately made a plan to abscond. He thought that by taking refuge in France, the French government would save him from British law.

When his ship was about to reach the shore of Marseille, he pretended to go to the restroom and opened the screw of the porthole and jumped into the sea and swam to shore. But unfortunately the French police caught them and handed them back to the British.

Veer Savarkar was sentenced to one or two life imprisonment ie 50 years due to his revolutionary activities. This type of punishment was a historical event. Because never before was a person sentenced to double life imprisonment. And the jail that was chosen to serve the sentence was a cellular prison built in the capital of Andaman and Nicobar Island. This prison was notorious under the name of Kala Pani. When Savarkar was brought to jail, some of his comrades were already present there, including his elder brother Ganesh.

There was a lot of work done from the prisoners held in the cellular jail. They were not even given full stomach food. Peeling the coconut out, cutting wood from the forests, laboring like crusher bulls in the oil mills and working according to spades in inaccessible places in the hilly areas, all these difficult tasks have been done by Veer Savarkar to other prisoners of the Cellular Jail. Had to do together.

Apart from this, prisoners were beaten a lot on small mistakes and in the dungeon they were kept hungry thirsty for many days.

Veer Savarkar was in the Cellular Jail at Port Blair from July 4, 1911 to May 21, 1921. In 1920, Vitthalbhai Patel, elder brother of Sardar Vallabhbhai Patel, raised the issue of the release of Savarkar which was also supported by Gandhiji and Nehruji. Savarkar himself sent some mercy petitions and as a result Savarkar was first sent from Cellular Jail to Yerwada Jail in Pune and then Ratnagiri Jail in Western Maharashtra. While in Ratnagiri Jail, Veer Savarkar wrote his views on “Hindutva”, which his supporters secretly published and promoted. Savarkar was released form jail on 6 January 1924.

Gandhiji was assassinated on 30 January 1948 by Nathuram Godse. Godse was a member of the Hindu Mahasabha and the National Self-Service Association. It is believed that Godse went to meet Savarkar in Mumbai before Gandhiji’s murder. On this basis, Savarkar was arrested and prosecuted, but he was acquitted due to failure to prove the charge.