What is Conflict Management – There is no one way to express or conceptualise conflict. It can be an expression of hostile feeling, negative attitude, antagonism, rivalry aggression, bickering and misunderstanding and so on. Simply stated, conflict is any tension that is experienced when a person perceives that his or her needs urges or desires are actually foiled or frustrated or likely to be foiled and frustrated.

Conflict is absence of congruity. A conflict is appearance of difference or difference of opinion or of interests. According to Professor David L. Austin, “It is a disagreement between two or more individuals or groups, with each individual or group trying to gain acceptance of its view’ of objectives over others”. When Miss Mary Parker Follet-a great management thinker defines “co-ordination” as “opposite of conflict”, one can easily define conflict is opposite of coordination.

In a nutshell, a conflict is the struggle between incompatible or struggling needs, wishes, ideas, interests of people. Conflict crops up when individuals or groups encounter goals that both parties can not attain to their fullest satisfaction.

(1) Disagreeing Perceptions, Values and Goals – There is said to be a conflict between two or more individuals or groups when they agree to disagreed perceptions, values and goals. Stated in another way, they do not have same perception value and purpose.

(2) Failure to Choose Best Alternatives – When two individuals or groups face a problem which has alternative solutions. Inspite of easily available solutions, they are not able to pick one solution or an alternative.

(4) Conflict is Perceivable – The parties disagreeing must perceive as to why they are disagreeing. If they do not perceive, the same, it means that there is no conflict, but there is perfect harmony, agreeing.

(5) Conflict is Dynamic – Conflict is a dynamic process but not static. It is because, it indicates set of events. In fact conflict is made up of countless interlocking disagreeing events. One event leads to another as one doubt leads another. Conflicts are part of a system or an organisation; an organisations is a sub-system of supra-system namely environment. Hence, environmental changes are constantly taking place and having impact on organisation. Situational changes create new conflicts. 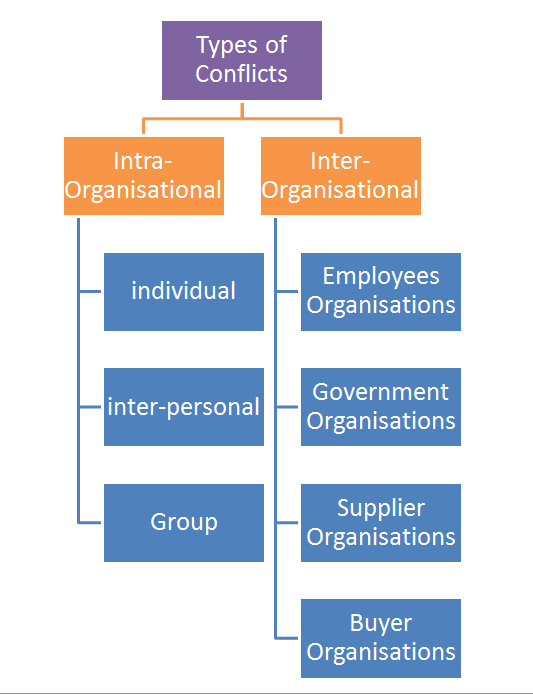 For example, two managers could be competing for limited capital or manpower resources. The other type of conflict is disagreement over the goals and objectives of the organization. 4 primary sources of interpersonal conflict are –

(3) Intra-group Conflict – When an individual is pitted against a group and is either unwilling or unable to conform to group dynamics, he or she invariably leaves the team due to intra-group conflict.

(4) Inter-group conflict – When the conflict is inter-group, two teams are involved in a deadlock, endangering the successful completion of a project due to differences in group dynamics. Organizational conflict is the discord that arises when the goals, interests or values of different individuals or groups are incompatible and those individuals or groups block or thwart one another’s attempts to achieve their objective.

In addition to interpersonal conflict, social psychologists have been concerned about the intergroup conflict for several years. Intergroup behavior is even specifically identified as follows;

“Intergroup behavior occurs whenever individuals belonging to one group interact, collectively or individually, with another group or its members in terms of their reference group identification. Several antecedent conditions have been identified for explaining the intergroup conflict. Reasons behind the inter-group conflict are –