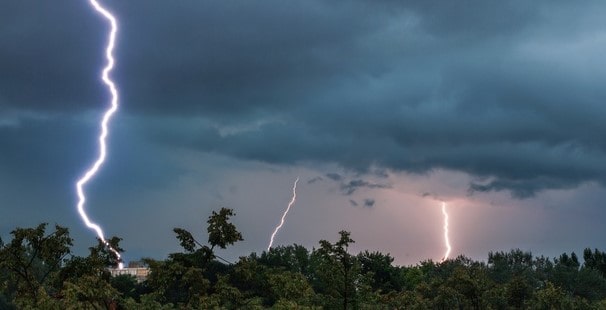 One thing we have been taught since childhood is that when it is raining and the clouds are thundering in the sky, one should not stand outside nor stand on a big building and stick to the tree. This thing is taught to avoid the direct impact of sky lightning.

The sky lightning can fall on the earth at any time from the rainy and thundering clouds and can harm many people. Today, we will tell you some surprising things related to this unintended crisis and will also tell you why sky lightning falls?

Why does sky electricity fall ?

After knowing the fun facts related to the sky electricity, you will definitely want to know why the sky electricity falls. In fact, when the clouds of Opposite Energy (+, -) collide with each other, the rubbing generated by it produces sky light.

Due to no conductor in the sky, the electricity moves towards the earth. It can do damage when passing through a conductor such as iron and copper on the earth. Electrical appliances can damage them and if a person gets caught in it, then his life can also be lost.

1. Every year 20 to 25 thousand people are killed due to lightning strikes.

2. 100 seconds of lightning falls on the earth every second.

3. According to a scientific research, if the global warming continues in this manner, then by the end of the 21st century, there will be a 50 percent increase in sky lightning.

4. Even though sky lightning and thunder arises at the same time, lightning is seen before the sound of lightning on earth because the speed of light is many times more than the noise. Apart from this, the sound of electricity has to come through many layers of strong air.

5. The highest chances of lightning fall are in the afternoon.

7. One myth associated with lightning is that once it falls, it does not fall there again. But in fact, it is not so, the chances of falling electricity again in a higher place remain the same as it was on the first fall. For example, on the Statue of Liberty of America, lightning strikes many times every year.

9. Of those who are killed due to lightning, 80 percent are men.

10. If a person is injured due to falling sky light, then it becomes very difficult to recover. Tissues are damaged by electricity, nervous system malfunctions, heart attacks can occur and any part of the body can be paralyzed.

11. June 28 is declared as International Day of Lightning Safety.