Egyptian pyramids were built to bury the dead bodies of erstwhile kings. The bodies of those kings were buried along with food and drink, clothes, jewelry, utensils and weapons while buried in the pyramids. Not only this, many times servants were also buried together. The ancient Egyptians believed that the person went to another world after death. Where they find things buried together is useful. Let us tell you some more interesting facts about Egypt. 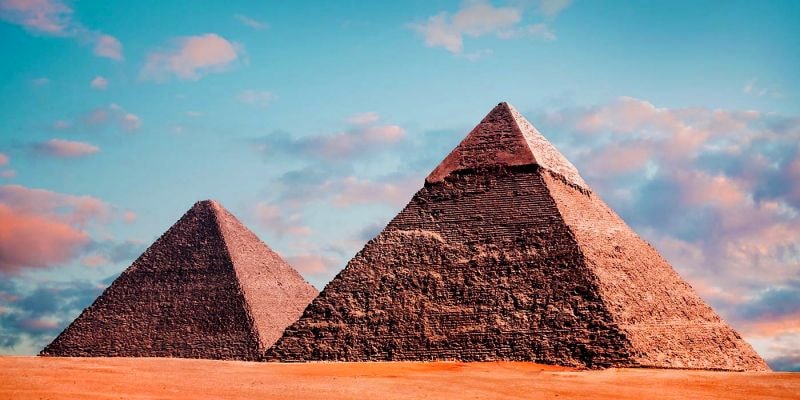 (1) Although there are 138 pyramids in Egypt, but the Great Pyramid of Giza is among the seven wonders of the ancient world. The remaining 6 wonders have been damaged to a great extent, but only the top 10 meters of the Great Pyramid have fallen. Two more pyramids are near to this pyramid, which are smaller than this.

(2) The Great Pyramid of Giza is 450 feet high. Till 4300 years it was the tallest structure in the world, but its record was broken in the 19th century.

(3) About 3 million laborers worked for 23 years to build the ‘Great Pyramid’ of Giza.

(4) 2.3 million chosen stones were used to build The ‘Great Pyramid’ of Giza. Each of these pieces weighs between 2 and 30 tons. The base of this pyramid is spread over 13 acres of land. The entire pyramid weighs would around 550 million kg.

(5) The ‘Great Pyramid’ of Giza was built in 2560 BC by the Egyptian shakhu Khufu for his tomb. It takes a long time to build a pyramid. Therefore, the ruler starts building pyramid during their rule, so that after their death he can be buried there.

(6) There are many questions about making Great Pyramid ‘in just 23 years. A pyramid scientist has calculated that if it was made in only 23 years, several thousand laborers would have worked 10 hours every day for 365 days of the year and put 30 pieces in an hour. But was it possible to keep 30 pieces ranging from 2 to 30 tons in 1 hour?

(8) The stones that make up the pyramids are fitted together in such a way that not a single blade can be inserted between any two of them.

(9) The temperature inside the ‘Great Pyramid’ is always equal to 20 ° C, no matter the outside temperature.

(11) It has been proved by scientific experiments that the unique energy waves inside the pyramid work continuously, which affect both living and non-living objects. Scientists call it pyramid power.

(12) All of Egypt’s pyramids are built on the west bank of the Nile River.

(13) 4000 years ago, Egyptian pyramids shone like glass because they were covered with polished white limestone. For this reason, they reflected the light of the sun and were also visible from the hills of Israel and maybe from the moon.

(14) The large pyramids contained precious things like gold and silver, due to which the structure of the pyramid was kept very complicated, so that the thieves would not steal it.

(15) Before the rise of the terrorist organization ISIS, about 150 million people visited the pyramids of Egypt every year. But due to terrorist incidents, the number of tourists visiting the pyramids is decreasing.